Baked Gujiya is a healthy version of popular Indian sweet Gujiya or Karanji. Gujiya is an Indian style Empanadas commonly stuffed with sweet mixture of mawa or semolina or coconut. Gujiya is a popular sweet prepared during Indian festivals like Holi, Diwali or Dusshera.

Traditionally, gujiya is deep fried in oil, some people also soak fried gujiyas in sugar syrup. However, nowadays we all try to avoid deep fried items. Hence, I have come up with a healthier version of Gujiya which is baked in oven. Believe me, it tastes awesome and people will eat this baked gujiya happily as it's guilt-free.

Gujiya or Gujia has different names in different regions. This sweet deep-fried Gujiya is popular in Indian states like Uttar Pradesh, Rajasthan, Gujarat and Bihar during Holi and Diwali Festival. It is also known as Pedakiya in Bihar. Gujiya is called Ghughra in Gujarat, Karanji in Maharashtra.

In Tamilnadu, Gujiya is known as Karachika. In Andhra Pradesh it is called Kajjikayalu and Karjikayi in Karnataka. Read here

What are the Different Stuffing of Gujiya?

Traditionally, Gujiya was stuffed with mawa or milk solids along with nuts and it is known as Mawa Gujiya. In Maharashtra, Karanji is stuffed with coconut, poppy seeds, nuts, etc. Often, Gujiya is also stuffed with semolina, desiccated coconut and dry fruits.

I have prepared a coconut stuffing using fresh coconuts, sugar and cashew nuts. You can prepare any sweet stuffings of your choice when you are making a sweet Baked Gujiya. You can also stuff the gujiyas using different flavors of sondesh.

So options of stuffings are endless. In case you are in hurry and do not have time to make stuffing at home, I would suggest you to use store bought pedas to stuff your Gujiyas.

How to make Baked Gujiya?

Start the preparation of Baked Gujiya by making the stuffing. You can prepare your choice of stuffing. As I prepared stuffing using fresh coconut.

Put coconut stuffing in the middle and close it such away it should be half circle or crescent in shape.

After that, seal the edges properly and using  a fork secure the sealed edges by making imprints of fork.

Finally, place the gujiyas in greased tray and bake in a preheated oven at 200 degree C for 20 minutes.

Can I make the Gujiya quickly?

This way you can save almost an hour time to prepare these baked gujiyas.

Can I use store-bought Pie-Dough for making the outer shell of Gujiya?

If you are not comfortable making it at home you can use store-bought pie dough for making the outer shell of Gujiya. Find the details here.

More Festive Recipes from My Blog 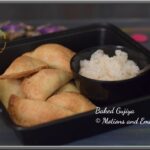 Also find us on:
Facebook | | Pinterest | Twitter |  Instagram
If you are trying any of our recipes, we would love to see the pictures of your dishes. Tag us in any of our Social Media Handles or use #motionsandemotions. You can also send us your feedback and pictures at: jhumu.here@gmail.com or motionsemotions.here@gmail.com