Kathal Biryani or Jackfruit Biryani is a plant-based biryani recipe which is cooked using raw jackfruit pieces along with varieties of spices and mix with the cooked basmati rice in layers.

We normally eat exotic tropical ripe jackfruit during summers. Have you ever got an opportunity to taste a raw jackfruit? In India, we get jackfruit in abundance especially during summer days.

Green or raw jackfruit is popular in Bengal and we call it Enchor (এঁচোড়). Raw jackfruit is often a good meat substitute for vegans and vegetarians due to it's texture. Hence, we call it Gach Pantha (গাছ পাঁঠা, vegan meat) in Bengal.

We (Read Bengalis) cook varieties of dishes using raw jackfruit. Enchor Kosha, Enchorer Dalna, Enchorer chop are popular ones. We relish Enchorer Dalna with plain rice whereas enchorer chop is best paired with a cup of tea. Kathal Biryani or Enchorer Biryani is an unusual recipe however, I assure vegetarian as well as non-vegetarian people can enjoy this.

How to store raw jackfruit in refrigerator?

During the season of jackfruit we get the raw ones and prepare varieties of dishes. Whenever I get a  raw jackfruit if I am not cooking it fresh then I definitely peel it and it into blocks. Later I soak the jackfruit pieces in the turmeric water for sometime and later boil it in a pressure cooker for one or two whistles max.

After the pressure releases I drain the water. Once it cools down I store them into clean and dry container with lid and store in the refrigerator. It stays well up to two weeks or little more than that.

Sometimes I keep raw jackfruit in a cover without peeling and cutting. It stays good in the refrigerator for only up to 2 to 3 days. If I keep it for long, it starts getting dried.

How to cut raw jackfruit?

Cutting of raw jackfruit is not a very easy job, especially for the beginners. In India, certain vegetable vendors cut the raw jackfruit and sell it. However, if it is not the same case in your part of the world then learn how to cut raw jackfruit.

Can I make a Vegan version of Jackfruit Biryani?

Of course, you can prepare a vegan jackfruit biryani or kathal ki biryani. To make this jackfruit biryani vegan you replace dairy products including ghee, yogurt and milk with plant-based alternatives. Instead of normal milk use almond, coconut or soy milk to soak the saffron. 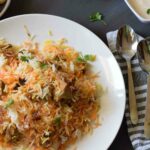 PIN it to read it later.

Also find us on:
Facebook | | Pinterest | Twitter |  Instagram
If you are trying any of our recipes, We would love to see the pictures of your dishes & Tag us in any of our Social Media Handles or use #motionsandemotions. You can also send us your feedback and pictures @jhumu.here@gmail.com or motionsemotions.here@gmail.com